When I started to create this website, the most demanding thing turned out to be... to write a few words about myself and from myself. Frankly speaking, I didn’t expect it, but the challenge has been accepted. So, let’s do it!

Where does the bird photography inspiration come from?

This is probably the most frequently asked question. It all began in 2010 when I came across a magazine interview with a nature photographer. Reading greedily, I became convinced that it is my cup of tea. So, I have found nature photography workshops and I took the bait! Really, it happened at once!

Long lenses, photographing from photo-boat, crawling in the mud, wildlife and satisfaction with my first frames - it couldn’t finish in a different way. I discovered the passion of my life. Coming home meant for me facing harsh reality. What could I do with my old good Nikon d90 and 18-105mm lens?

But Rome wasn’t built in a day! I bought my first telephoto lens and have taken my first attempts. These more and less successful. Honestly, the latter were more frequent because I had no knowledge about birds and, what is more, about photographing them. But step by step I was learning on my own mistakes and I reached the point where I am now.

What is fascinating about bird photography?

This is a question - what is fascinating about it? Getting up at 3:00 a.m.? Crawling through the marshes? Wading at night through weeds and bushes? Lying motionless under the masking net? And maybe sitting out in the freezing cold for ten hours or even more? Frightening, isn’t it?

For me the bird photography is rather all about positive emotions. It is hard to describe in words what a birdwatcher feels when he observes breathtaking nature shows. I am writing about these phenomena which are known for common city dwellers only from TV. And you as the photographer can become a part of this world being where the whole action is happening – often only few meters away from the birds. You can watch, hear and absorb this whole reality. And, what is more, you can take the pictures!

So far I haven’t had too many of them. I’m a member of The Polish Nature Photographers' Union. In 2016 I obtained the first place and two additional awards in “birds” category for the Photographer of the Year in the Masovian branch contest.

I participated in the following exhibitions:

I’m the author of the subsequent publications: 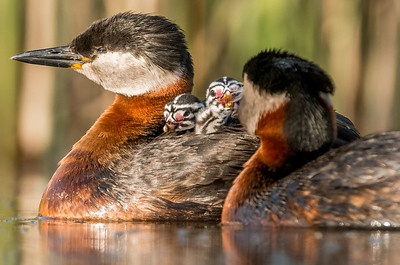 Of course, grebes! Do you want to know something more? Take a look at my "Grebes of the World" project.

Have you got an idea for an interesting project? Are you looking for a nature photographer? Do you like any of my pictures, or maybe do you want just to say “halo”? You can contact me on: dominik.chrzanowski@outlook.com.